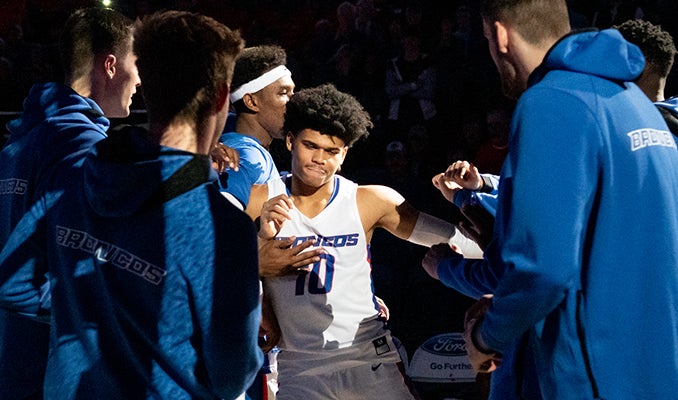 Boise State men's basketball will begin its 18-game Mountain West Conference The Mountain West Conference released the league’s 2020-21 men’s basketball schedule subject to approval from state, county and local officials.  The conference moved to a 20-game schedule with teams facing each other in a two-game series at the same location. Each institution will have five home and five road series. Boise State will open MW play at home against New Mexico, and will also host Air Force, Fresno State, UNLV and Utah State. The Broncos will travel to San José State, Wyoming, Colorado State, Nevada and San Diego State.

Boise State kicks off league play by hosting New Mexico (Dec. 3 and 5). Mountain West action resumes at the end of the year, when the Broncos head to San José State (Dec. 31 and Jan. 2). A busy January includes home games against Air Force (Jan. 6 and 8) and Fresno State (Jan. 21 and 23), while traveling to Wyoming (Jan. 11 and 13) and Colorado State (Jan. 28 and 30). After returning from Fort Collins, the Broncos will go back on the road to face Nevada (Feb. 5 and 7).

The league season wraps up with the four teams picked at the top of the preseason poll squaring off against each other. The Broncos, picked second, will close their home schedule by hosting UNLV (Feb. 11 and 13) and Utah State (Feb. 18 and 20). The Rebels were picked to finish fourth and the Aggies third. Boise State’s final series of the regular season comes at projected-champion San Diego State (Feb. 25 and 27). This will be the sixth time the in Boise State’s 10 years in the Mountain West that the Broncos face the Aztecs in a regular-season game on Feb. 27 or later, and the fourth time in the last seven years that meeting will occur in San Diego.