Masks or face coverings are required to be worn by all patrons while in the venue. COVID-19 related health protocols may be in effect at the time of performance, including, without limitation, testing, confirmation of prior travel to restricted areas and/or confirmation of no known symptoms of and exposure to COVID-19. We reserve the right to unilaterally make changes to health protocols according to updated public health guidance and applicable law. Future updates will be provided to ticket holders prior to the performance. Any ticket holder who does not comply with any COVID-19 related health protocol may be required to leave the venue, and his/her/their ticket will not be refunded. Guests with accessibility questions, or who require additional assistance related to the venue's COVID-19 policies may email [email protected] or call (208) 426-1766. Please note: This event is being planned at full capacity, subject to applicable law and governmental approval. 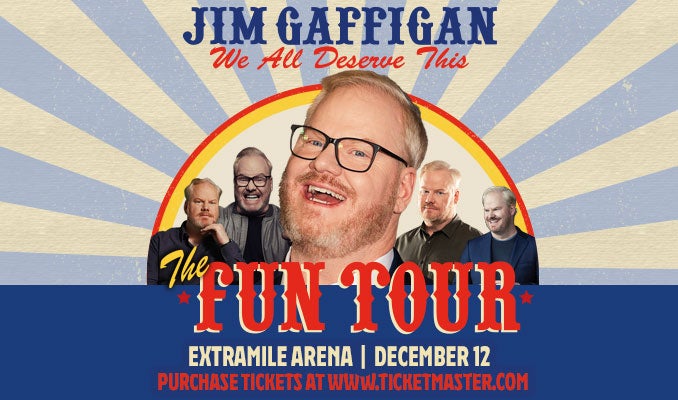 Tickets On Sale beginning Friday, May 14 at 12pm

Jim Gaffigan announced his 2021 The Fun Tour along with 25 new dates, which will kick-off August 14 in Wilmington, NC with more dates to be announced soon. Presale begins Tuesday, May 11 at 10am and will go on sale to the general public beginning Friday, May 14 at 12pm local time.

Gaffigan’s tour itinerary also includes a number of rescheduled shows from 2020 that were moved due to the pandemic. For rescheduled shows, all previously purchased tickets will be honored for the new dates listed below.

Gaffigan is a six-time Grammy nominated comedian, actor, writer, producer, two-time New York Times best-selling author, two-time Emmy winning top touring performer, and multi-platinum-selling recording artist. He is known around the world for his unique brand of humor, which largely revolves around his observations on life.

A top ten comedian according to Forbes’ 2019 comedy list, Jim recently released his 8th stand-up special, The Pale Tourist, on Amazon which was nominated for a Grammy. He was also recently awarded for being the first comedian to reach one billion streams on Pandora. Up next, Gaffigan will be seen as the lead in the Sci-Fi dramedy, Linoleum, and will star as the role as Mr. Smee in Disney’s Peter Pan and Wendy, opposite Jude Law and Yara Shahidi. He will also be heard in Disney/Pixar’s highly anticipated film, Luca, opposite Jacob Tremblay and Maya Rudolph which is premiering June 17th.

On the silver screen, his many credits include Three Kings, Super Troopers 1 & 2, and Chappaquiddick. 2019 was Gaffigan’s biggest year to date with an astonishing eight films releasing, three which premiered at the Sundance Film Festival including Troop Zero with Viola Davis and Alison Janney, Them That Follow and Light From Light – with many festival goers and press calling Gaffigan the “King of Sundance.”

In addition to two seasons of the critically acclaimed semi-autobiographical The Jim Gaffigan Show, which he wrote and produced with his wife Jeannie, and his widely popular stand-up comedy specials, Gaffigan has guest starred on many television comedies and dramas, ranging from Portlandia and Bob’s Burgers to the HBO cult hits Flight of the Concords to dramatic roles in Law & Order.

Gaffigan has won two Emmy awards for his humorous commentaries on CBS Sunday Morning. In 2015, Gaffigan had the great honor of performing for Pope Francis and over 1 million festival attendees at the Festival of Families in Philadelphia. For more dates and info go to: www.jimgaffigan.com

*Las Vegas, NV show details to be announced week of May 17 with public on sale May 21